The Japanese in Singapore

I was doing some research into early Japanese settlers in South East Asia — there were prominent Japanese settlements in Thailand (in Ayutthaya) and in Vietnam (in Hoi An). In Singapore too, the Japanese started arriving as the city started growing. In some articles I found the mention of a Japanese Cemetery in Singapore.

Before visiting the cemetery I did some more google search on the place. I found that a famous Japanese writer’s grave is in the cemetery. Futabatei Shimei (1864-1909) is considered as the first modern novelist in Japan. Shimei spent some time in Russia translating the works of some Russian writers. He was on his way home from Russia when he died on the Bay of Bengal. 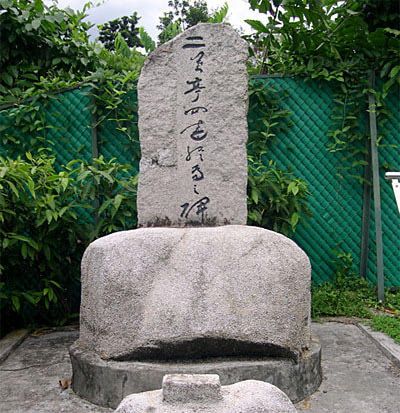 Futabatei Shimei’s grave at the Japanese Cemetery in Singapore.

Futabatei Shimei was his pen name. His original name was Hasegawa Tatsunosuke. An interesting snippet about his pen name from Wikipedia

The origin of his pen name is in the curse his father said when told by his son that he aspired to study literature: Kutabatte shimee, “Go to Hell!”

The cemetery is also the final resting place of Otokichi Yamamoto, the first known Japanese in Singapore.

The power of nostalgia I was talking to YuXin about how nostalgia plays important part in people’s life as they grow older. I often tap on nostalgia to endear myself to

The Attic, memoir of a Chinese landlord’s son In China, I always ask my friend’s parents about the life in the 1950s, the 60s and the 70s. I love looking at old photographs from those days. I am