The art of lost

From Manila, I went to Cebu. Cebu was too big for me so I went to Dumaguete. Dumaguete, a university town (housing the famous Silliman University), is known as the city of gentle people. Shops around the campus sell “Silly man” T shirts. The main street runs by the sea front. It is colourful with seaside stalls and friendly people hanging out. It was nearing Valentine’s day. The trees along the shore was lined with neon hearts.

The university campus faces the sea. The local government wanted to reclaim some of the sea. The students were understandably angry over this. The campus was covered with “Say no to reclamation” posters. Some students sang the Silliman song for me. It goes

Where the white sands and the coral Kiss the dark blue Southern Sea; And the palm trees tall and stately Wave their branches in the breeze; Stands a college we all honor, In our hearts without a peer; Silliman, our Alma Mater, Ever lovely, ever dear.

Some people in Dumaguete had mentioned Siqijor. Just when I decided to settle down in Siqijor and live happily ever after, scam boy Nick called from up north (Luzon) asking me to join him. He kept on saying how beautiful it was up there in the mountains. I told him how peaceful it was down here and asked him to come down. He won in the end. I returned to Dumaguete and I took a flight to Manila. Cebu Airways is probably the “fun” est airlines to fly. Shortly after the meal they started the “aisle games”. They play some music and the passengers had to figure out the song.

At the bus station in Manila, there were posters most of them featuring Arroyo (the Filipino president). A kid was painting a moustache on her face. He and offered me the chalk and pointing at an un-tarnished poster. I thanked him and refused, not keen on creating a diplomatic incident. I took the night bus to Banaue. The driver looked at me and asked me if I had a jacket, he said it would get very cold up in the hills. I shrugged it off, saying I am used to cold. He just smiled. At around 2 AM the bus started climbing up the hills. Soon, I was shivering. I pullet out a shirt and wore it over my t-shirt.Soon I was stuffing newspaper inside my shirt to keep warm. 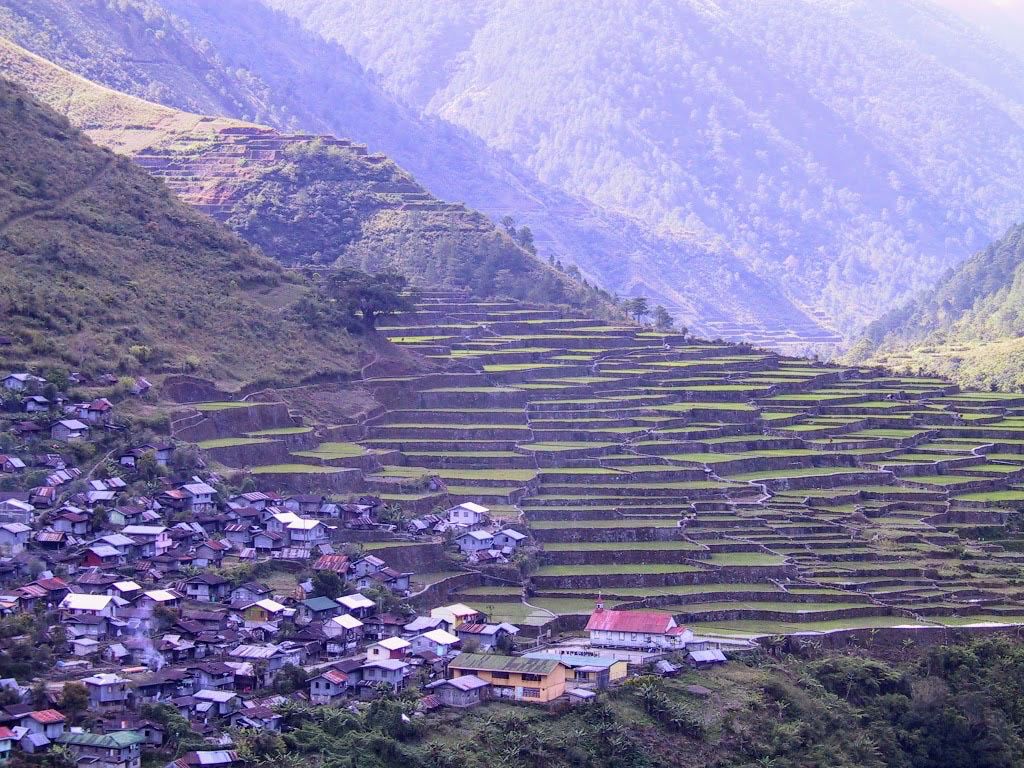 Around 5 in the morning, I reached Banaue. It was dark. I had to take another jeepeny to Bontoc, the town where Nick was. I stepped out of the bus and it was very very cold. The driver said I could sleep in the bus. He said the jeepeny service to Bontoc only starts at around 7:30. I went back inside the bus and fell asleep. I woke at 6:30, the sun was just coming up. another bus stopped nearby. Most of the passengers were locals. A few tourists stepped out. Some of them started walking towards the town. I knew where they were heading. I joined them. I had heard about it, it is one of the most wondrous sights in the world — The Banaue Rice terraces — carved over last 2000 years by the ifuguo tribe people. We reached the edge of the town. We could make out a deep drop, It was covered with mist. It cleared slowly revealing the mountain slopes and the terraces. The terraces started at the top and threaded around the slopes right down to the valley. I had seen pictures of it. But standing over there at the top and watching the green terraces was really something.

I reached Bontoc by noon. It was good to see Nick, I was meeting him after six months. We decided to celebrate the reunion with a short trek. It was perfect, we would be back in four hours, just in time for the Valentine’s party in the town. We went all right, in good time. On the way back we took a wrong turn. We got lost. Soon it was dark. The path was very narrow, one wrong step and we would just slide down the slope. After walking carefully for about an hour we found a flat surface. We decided to lie down there. It started getting colder. Then it started raining. In a distance we saw some moving lights. It seemed like people walking with lanterns in their hand. We tried to attract them with our camera flash. No luck. We gave up. The rain stopped and the sky cleared. We could see the stars and some satellites pass by. It got colder and colder. We got up once in a while and jumped about to keep warm.

Next morning we spotted a stream. We figured we could reach a village if we followed it. Halfway the stream turned into a waterfall. After contemplating harebrained schemes like building a rope from roots, we just jumped down. Some hours later we reached a village. A kind lady gave us food. Our first meal after 18 hours. The villagers showed us the way to Bontoc. They said that the next jeepeny to Bontoc was at 5 in the evening. We started walking, hoping some vehicle would pass by. We walked for 12 kilometers. We were on our last kilometer when a construction truck slowed down next to us. They dropped us to our hotel in Bontoc.

We went back and fell asleep. The next morning we went for another trek, this time with a guide. We climbed the whole day. At night we reached a village on top of the mountain. We stayed at the chief’s house. We ate dinner with his family, rice and beans. The chief’s father told us his war stories. the surrounding mountains were where the tribal’s engaged the Japanese during WWII. Later in the 60s and 70s the mountain people fought a guerilla war with Marcos’s soldiers. 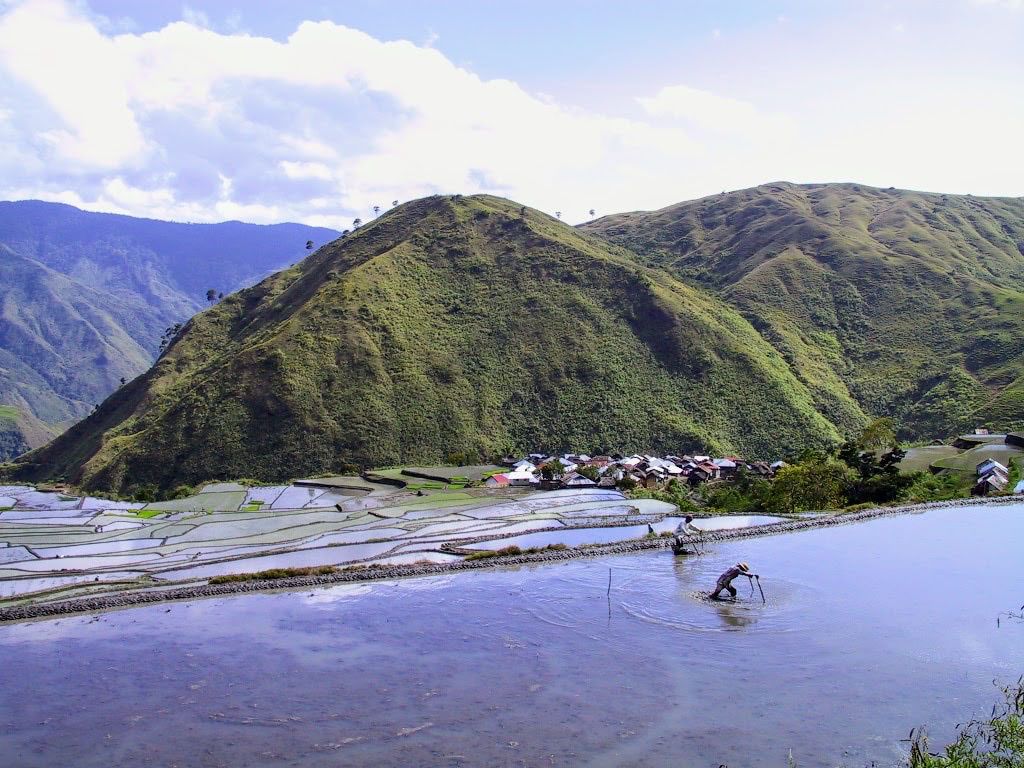 They laughed when they heard about us getting lost up in the hills.They offered us some traditional “herbs”and rice wine. The wine had some berries floating in it. They talked about some of their customs. I mentioned some of ours (in Mangalore, the part of India I come from). There were a lot of similarities, like spirit worship and animal sacrifices before the planting season. Up there in the mountains, I felt at home, some strange kinship, I guess all tribal cultures share some subconscious. Or, was it the “herb”?

The island of mystery and magic, Siquijor Have you ever ended up some place and never wanted to leave? It happend to me in a little island in the Philippines. I was in Siquijor, an island

For a decent curry I was in Penang one evening. It is such a delightful town with so much interesting food. But I wanted green curry. So, next morning I went across