Meet my Daruma doll. Daruma is the Japanese name of the Indian monk Bodhidharma. Bodhidharma travelled from India to China (where he is known as Damo) around AD 500 and founded Chan (or Zen) school of Buddhism.

Daruma dolls are sold at temple festivals (matsuri). The eyes of the dolls are not filled in. Around new year people buy these dolls. They make a resolution and fill in one of the eyes. If they are able to complete the task successfully, then they will come back and paint the other eye. At the end of the year, the dolls are taken to a temple and burnt.

Daruma dolls are popular with Japanese politicians. They paint one eye before the elections, and if they win, then they paint the other one.

I bought my Daruma doll from a bookshop. As a convenience, these bookshop dolls came with one eye already coloured in. The other eye is provided in the form of a sticker saving you the hassle of messing with paint. The character you see painted in front is called “fuku” in Japanese, or fu in Chinese. It means good luck. This doll also doubles up as a piggy-bank — there is a slot at the top to drop in the coins. 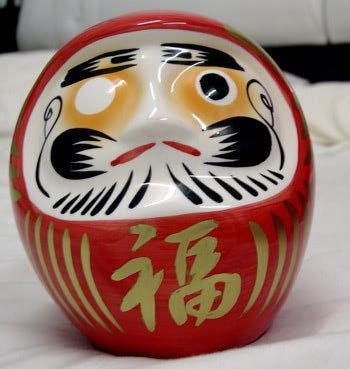 Postcards make me happy Even though half the time I am searching for a wi-fi, I am not a big fan of sending e-cards. I prefer sending out postcards

Eating mochi Japanese rice cakes are called Mochi. Mochi is prepared by pounding rice until it compresses into a hard solid. This particular ceremonial mochi