I was at one of my favourite places in China, Shamian Dao. This tiny island by the pearl river is my secret hideout. I had discovered it on an earlier trip. Connected to Guangzhou by a couple of bridges, this kilometre-long stretch of land is a total contrast to Guangzhou. While Guangzhou prides itself on its cacophony, Shamian in an island of tranquillity. In the Qing period, Shamian was the place where the noblemen used to turn up in their pleasure boats for an evening of indulgence. In the mid-1800s, the British and the French scammed Shamian and set up their settlement. Later Shamian becomes a business district with buildings for embassies and now extinct companies like the “Bank of India, Australia and China”. After the communists took over, Shamian went into decline.

Over the last couple of years, the authorities have gentrified the area and renovated the buildings. Shamian has some very expensive and also the cheapest accommodation in Guangzhou. Relaxed atmosphere, no traffic, nice riverfront, tennis courts and a primary school make up rest of the island. As a backpacker refuge, Shamian always guarantees interesting or scam people. One such person I met this time was Dingra. Dingra hails from Nepal, but lives most of the time in Yangshuo in China, teaching English and selling handicrafts. He does not have a Chinese resident permit. So, every six months or so he crosses over to Hong Kong or Vietnam and enters China again. He kept bugging me to help update his website, whenever he saw me at the only cybercafe on the island. 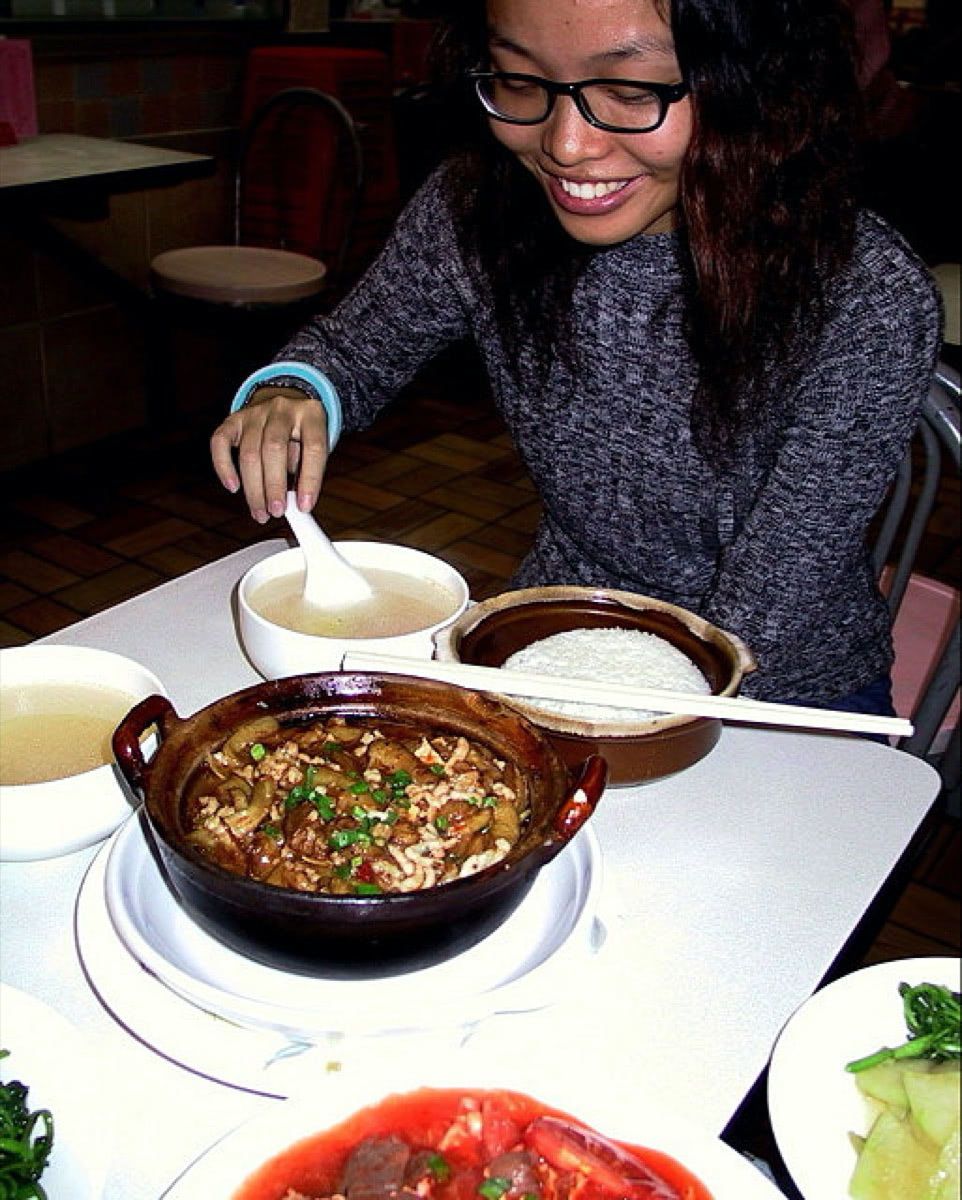 I met Lynn at Shamian. I had a hard time recognising her. She had changed a lot since I last saw her the last time I was in Guangzhou. She was sitting on a bench with a drawing pad painting a building in Shamian. We got talking, and exchanges email addressed. We kept in touch via email and occasional postcards). Lynn had the afternoon off, so we decided to walk to the old part of the city past the Peace market. This market used to be notorious for selling exotic animals. The authorities had cracked down in recent years, and all they sell now is pets. We crossed the pet shops where (little doggers and catters were being showered or fed) and entered some quiet alleys. Lynn said that she used to come here often, the quiet helps her think. There were two-storey houses on either side of the narrow lanes. The walls were covered in moss, and the junctions had rusty swings or see-saws. We walked for almost an hour, kids were playing, and some grannies in jackets (it was chilly) were smiling. Lynn said she missed her granny and her childhood days in her native Zhejiang province. I asked her to teach me some words in her native dialect. It sounded a bit like Shanghainese but more forced and nasal. So ni hao sounds like nngghh hanhh.

At her place, Lynn showed a short movie she had made. I could not understand most of the dialogues, but it had some excellent visuals and slick editing. The video was edited on her home computer. The evening shots were filmed early in the morning to avoid the police. It seems that the authorities do not like kids running around with video cameras. Later, she introduced me to her flatmates. I recognised them as the cast in her movie.

Lynn has a little doll, and it features a lot in her photography. She had an album full of pictures — the doll perched on the ledge, the doll on old bicycles, in a train station, outside a shopping mall. All her pictures are from different angles. She loves angels. In the bus, I gave Lynn a little wooden dolphin that I had picked up in Bali. She held it by its tail and shifted it up above her. She kept turning her head and squinting, looking at the dolphin from different angles.

The world in her eyes I was starved for smiles. A friend suggested that I go to Bali. It was just two weeks after the “bom” had gone off. Most places were empty, and

What am I doing here? “Friends …eh..” The official at the embassy was suspicious. It was supposed to be a simple matter. I needed more pages on my passport. All I had to