A few months back I was browsing through a junk shop. I spotted a record player. I remembered the 1970s. The 70s were wonderful, weren’t they? The sun was brighter and you could cross over into Afghanistan via Iran. I was still a kid when the 1970s ran out.

Those days, I had a neighbour, Anu. I was fond of Anu. She had a big collection of American comics — a rarity in those days in India. Almost every afternoon, after school, I would end up at her place. Anu would always play some rock n roll records, sit by this large window overlooking the hill, polishing her nails or reading a book. I spent countless afternoons, lying on the floor by her record player, watching the record go round and round, and stealing occasional glances at Anu, that she always returned with kindly smiles. 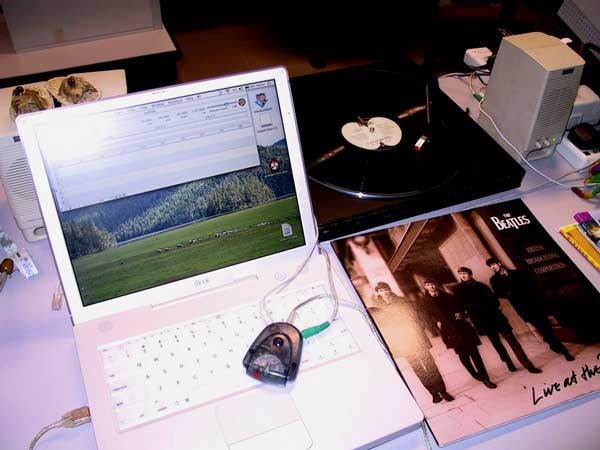 The 1980s came around, I left the town. The 1990s, I left the country. Encountering that old record player in the junk shop, all those childhood memories came back (If this was a film, you would hear a Beatles’ soundtrack in the background). I ended up buying the player. I also managed to find some Beatles, Rolling Stones and Faces records.

One day, some friends from work came home. We have this one intern fond of fishballs and Beatles. She was eager to try the record player. She tried playing an old Beatles record. It kept skipping tracks which made the intern a bit disappointed.

A few days later I found another Beatles record which was in good condition. I figured that it would be a good surprise for our intern. I took the player to my office. It was an instant hit. We have a streaming server that we use for our courses. It normally broadcasts some banal music. We hacked the output of the record player to feed into the streaming server. Anyone on our campus could now listen to the records. The streaming setup had a video camera. We pointed the camera to the turntable. People could see the record go round and round as they listen to the songs. It was fun using today’s technology to spread some 1970s happiness.

Commodore 64, my first computer I was in Mysore earlier this month. They were moving the house. So, there I was — sorting stuff into what to throw and what to keep. It is the

A snake snack The other day someone asked me if I have ever eaten a snake. “Yes”, I replied. “How was the taste like?”. “It did not have any taste or rather it